Probably Japanese Nattō is one of the least popular Japanese foods among foreigners.
Many foreigners cannot stand it, let alone eat it, maybe because of its smell and gooey texture.
However, in Japan Nattō is very popular, especially for its high nutritional power and low price.
Many of us eat, or at least make it a rule to eat, Nattō every day.
Recently, we eat Nattō not only with steamed rice, but also with some western staple foods, such as pasta or bread.
Let’s have a look around the deep world of Japanese Nattō.

Kanji for Nattō is 納豆.
As I mentioned in the Soybean page, 豆 indicates a sacred container used to dedicate agricultural products to gods.
General pronunciation for 豆 is ma–mé, whereas for 大豆, we pronounce 豆 as “zu”.
And here, I proudly introduce another pronunciation for 豆.
That is “to (u)”.
To sum up, there are three pronunciations for 豆: 1) ma–mé, 2)zu, 3) to(u).
As you have wisely guessed, 納豆 adopts the pronunciation 3) to(u).
We can not forget that Tofu 豆腐 also uses this pronunciation.

In the 17th century, Nattō became an indispensable food among common people.
Two main fermented soy foods, Nattō and Miso soup, were the standard breakfast for Japanese people.
In the past, Nattō vendors would peddle around the neighbors early in the morning.
As I explained in the rice page, the calorie of rice is one of the highest among all the grains.
However, it contains almost no salt or protein.
To make up for these deficiencies, we need another food. That’s where Miso and Nattō come in.
Miso and Nattō are both made from soybeans, and soybeans contain quality protein in large quantities.
They also contain enzymes that boost its nutritional content.
In addition, we cannot forget the salt added to make Miso.
As a result, they are ideal accompaniments to cooked rice.
For ages, many Japanese people have been eating Miso soup and Nattō with cooked rice in the morning because they provide enough nutrition to work hard for the rest of the day.

Anyway, I’m happy to announce that there exists another kind of Nattō which is not sticky and doesn’t smell so bad.
It is what we call “Téra Nattō” .
Tera means temple.
Téra Nattō came to Japan from China in the 7th century.
Initially, a building of Buddhist temple called “Nassho” (納所）was the designated place for Nattō making.
Because 納所 commands all the general affairs of the temple.

As the same Kanji 納 shows, this is the name origin of Nattō (納豆).
By the way, 所 means place and it has two pronunciation: 1) tokoro and 2) sho. 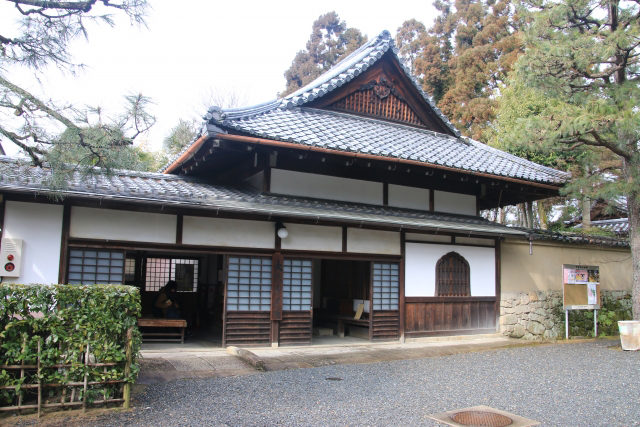 The production method of Téra Nattō is as mentioned below:

1) place cooked soybeans on the rice mat in which Koji-bacteria can increase.
=> thus we produce soy- Koji
2) add salt in this soy-Koji and leave it for 3-4 months.
Activity of lactic bacteria is vigorous in this process.
3) dry these fermented soybeans

In addition, you can not forget the important role that lactic bacteria plays in fermentation. Lactic fermentation adds acidity and makes the flavor characteristic.

By the way, this Nattō becomes black because of the melanic pigment derived from the fermentation of amino acid called tyrosine.

This is the same reason why soy sauce is black. 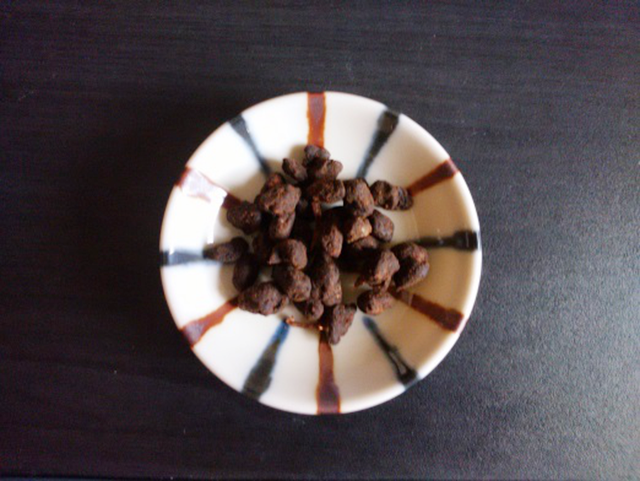 On the other hand, the production method of ordinary Nattō is quite simple.

That’s all. Quite simple.
The bacteria in straws called bacillus subtilis Nattō changes soybeans into Nattō.
It is said that Nattō was invented in Japan in the 14th century, but many scholars believe that they had found and used much earlier this witchcraft caused by rice straws.
The stickiness of Nattō is derived from glutamic acid which consists of the “umami” flavor. 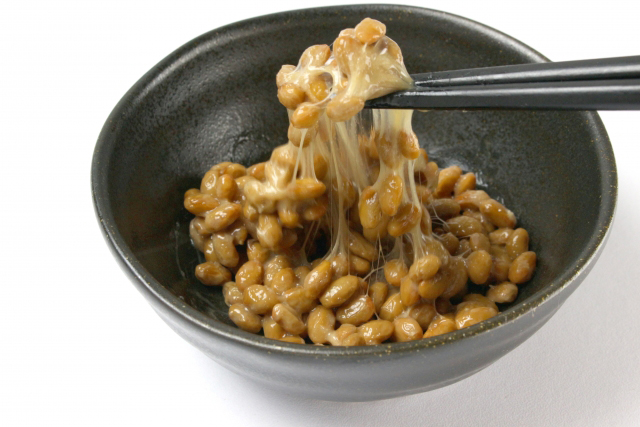 But today, it is uncommon to make Nattō by using rice straw.
Nattō bacteria is added in cooked soybeans still hot and after fermentation, they are refrigerated.

In the high end supermarkets including department stores, Nattō covered with straws can often be found, yet these straws are sterilized and serve only as a receptacle. 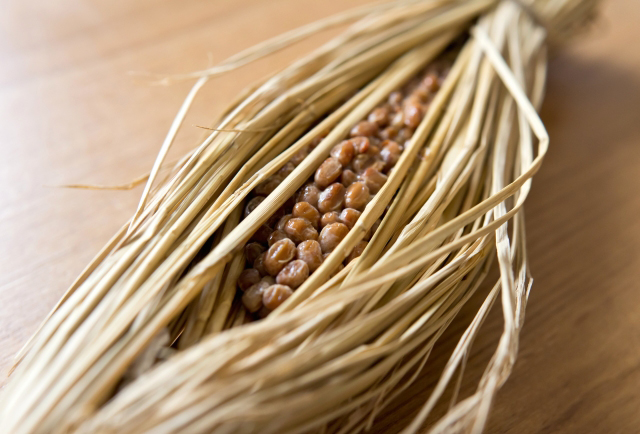 Just like Ama–saké for Saké, Nattō also has its colleague in the sweet world.
It’s Ama–nattō (甘納豆）.

As I mentioned in the Ama–saké page, Ama（甘） means sweet.
Different from Nattō, it serves as a sweet covered with sugar.
In a word, Ama–nattō is a confiserie in France.
I know there are various sorts of confiserie in the world, such as marron glacé and fruit confits.
However, I proudly confess that Ama–nattō is the only confiserie using beans.
As I mentioned in the Soybean page, the love for beans (mamé) is so huge in Japan that we are eager to use them in all the ways imaginable. 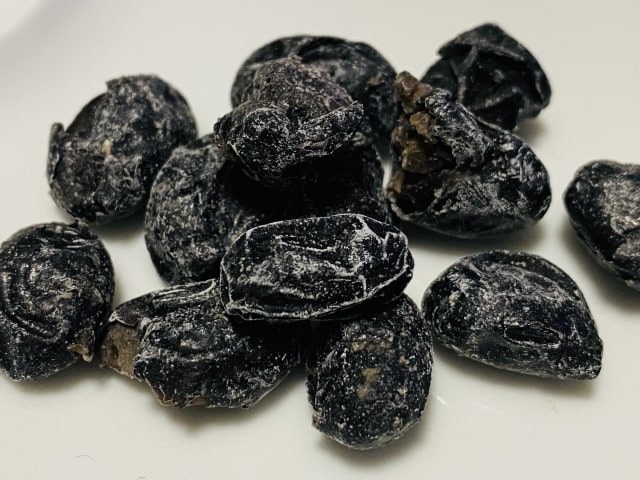